Veg Groups was started by me, Jason Schramm, in 2016 as an outlet for my ideas for websites to help people live more compassionate lives and harm less animals. The first big project I released was VegEvents.com. In September 2019 I left my day job so I could focus my time and energy on building the sites and apps the world needs but that don’t exist yet.

I have been building websites for over 20 years. But until I went vegan I didn’t feel that any of them made a meaningful positive impact on the world. Some of them were for customers and some of them were my own ideas. 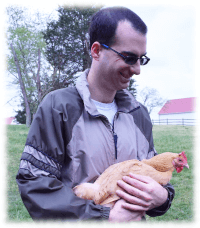 In 2013 I watched Vegucated and immediately stopped eating meat. Over the following years I cut out more animal products but didn’t commit to living fully vegan. In April 2015 I completed a vegan pledge program in Baltimore, MD. From the moment I held my first living chicken at a local animal sanctuary that was it. And that was the beginning of the journey that led me to starting Veg Groups.

After going vegan I knew I needed to find more support in order to stick with it. So I found every local Meetup group that I could and started going out to where the other vegans were. I made some great friends and finally found what I had been looking for over the years: a community and a sense of belonging to something greater than myself.

I began volunteering to table at events and festivals for local vegan groups. And this exposed me to pre-vegans and new vegans. I realized that many of them didn’t know there were vegan events every month right near them. So I set out to build a calendar of vegan events from around the world that people could search through. That became VegEvents.com.

Since 2015 I’ve collected ideas for all kinds of different vegan-oriented websites and apps that I think will help people and animals. They are ideas that either don’t exist or could be done better than what exists. They mostly follow the pattern of taking information or resources that are hard to find and putting them in one easy-to-search place. But because of my intellectually exhausting web development day job I wasn’t taking the time to build them in my free time, aside from VegEvents which took up all that time.

I started thinking about my future and what kind of life I wanted to lead. Right before the Animal Rights National Conference in July 2019 I decided to finally leave my day job so that I could focus on the animals. And since September 2019 I have been focused on building more websites and apps that help people go vegan or stay vegan.

Now I spend my days working on something related to Veg Groups. And I'm always thinking about how to solve a problem, what features to add to an idea, or a new idea that might help people and animals. I’ve integrated the Veg Groups mission into my life and I’m loving it!

Please consider supporting us if you enjoy our work.

We offer our websites for free and we keep them clutter-free. If you love one of them and want to support their continuation, chip in what you can.

Your support will allow us to continue our work, continue to maintain and grow existing projects, and create new projects. Your support makes a difference!